There are many secret gardens in London, most of which can be found on-line, but when the Phoenix Garden in Soho was mentioned to me by the MPGA I was somewhat surprised that it had escaped my attention, bearing in mind my knowledge of London and its gardens. Sitting here 24 hours after spending a wonderful afternoon in the company of Chris Raeburn in the Phoenix Garden, which is in Stacey Street, just off Shaftesbury Avenue behind the Odeon Cinema, the experience has left me somewhat stunned and lost for words.

Abundance and mystery beckons you to enter and explore the Phoenix Garden.

I don’t think I have ever visited a garden whose story is so full of impossible challenges, community toil, relentless quests for funding and survival, plus one man’s passion for community and wildlife gardening.
It’s a story of bleak beginnings, dramatic middles and continuing contemporary challenges. However, despite elements such as the garden’s battle with local criminality, the rife drug taking in the area, the homelessness and the incredibly dry and shallow soil Chris and his volunteers have had to work with, there is – like the many Dickensian novels it reminds me of – at least a happy ending. So, where to start? 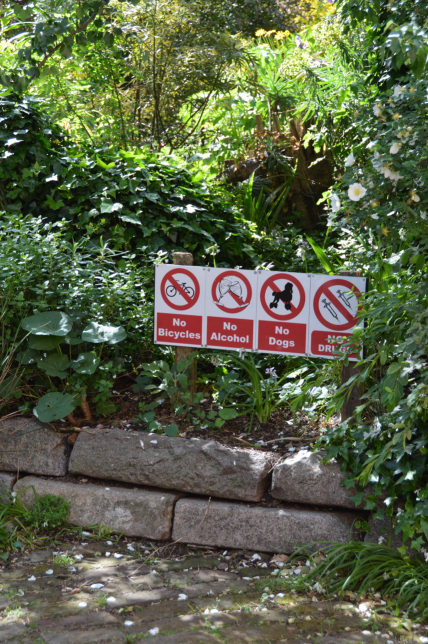 Well, it’s different from ‘don’t walk on the grass’.

Well, I could go back to 1117, to the time of King Henry I, and the building of a hospital on the site of St Giles-in-the-Fields (the area hadn’t been named that at the time) for the purpose of tending to those afflicted by the huge outbreak of Leprosy sweeping across England at the time. An early historical map shows the original Leper hospital (c), together with the church (b), and a green square showing an area of garden that was attached to the hospital. Coincidentally, with the passing of around 900 years, this is also the area that the Phoenix Garden now occupies. 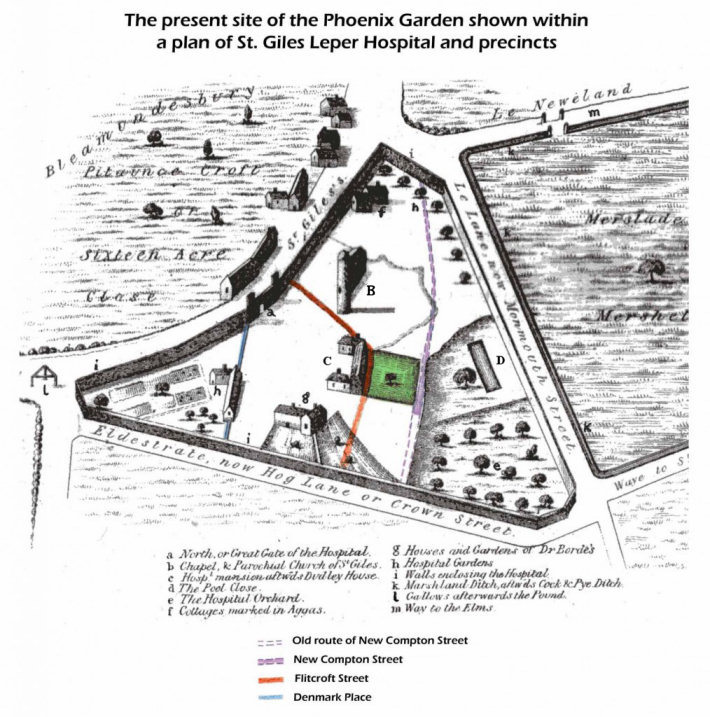 So, moving quickly on, and passing through some 800 years of history, we arrive at October 1940, when several WWII bombs fell around St Giles, creating a bombsite that, once cleared, would see the site used as a car park right up until the establishment of the Phoenix Garden in 1984. 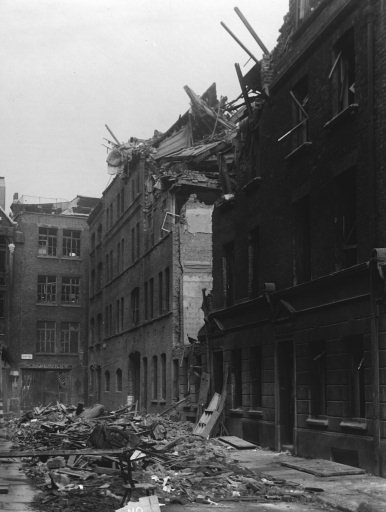 Therefore, even below its roots, the garden currently stands on the many rubble-filled cellars created by the bombing. Chris told me that in many parts of the garden you can spear the soil with a metal pole and feel the vacant voids below. In fact, if you were to accidentally let go of the rod it could simply slip down into a seemingly bottomless abyss.
On top of that (quite literally!) and as if to add insult to injury, the unusual nature of the extremely shallow soil, together with the rather uneven and undulating contours of the grounds, is due to some 14 tons of illegally fly-tipped hardcore that builders dumped on the site back in 1984: brazenly deposited by some seventeen tipper trucks sometime between its transition from car park to garden. 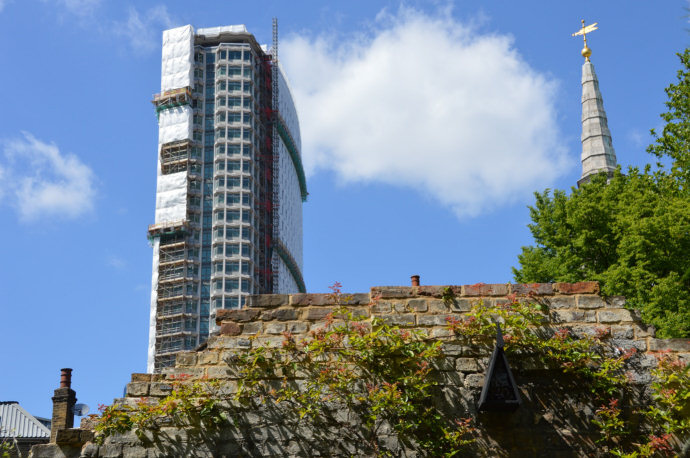 A character wall… a trained rose… a bug hotel. A borrowed landscape of Centrepoint and the spire of St Giles.

So, in 1984 there was the potential for a community garden to be built on some very shaky foundations. Fast forward a few more years to the year 2000 and the challenges facing the garden continued, with the small area around St Giles becoming a somewhat notorious home for the shadier side of London.
Unfortunately, sandwiched between famous London thoroughfares and hidden from the view of your average tourist and London worker, the garden became a secluded lure for criminals. It offered a safe haven for drug taking, somewhere to sleep and a place to dump stolen handbags, as well as acting as an open toilet for late night revellers! 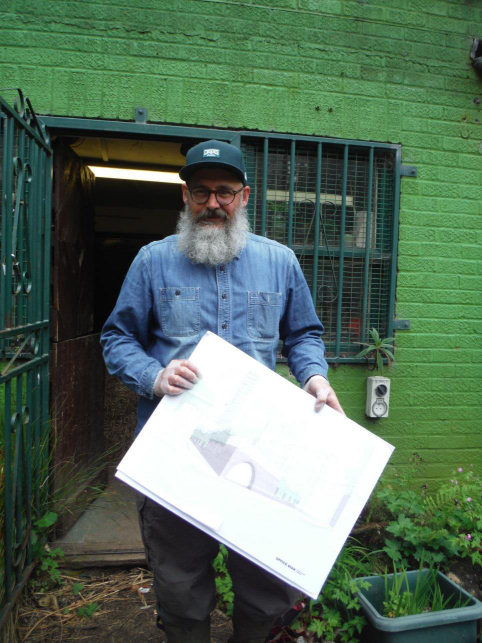 Having recently secured a new 25-year lease from Camden Council, together with over £400k of funding, Chris shows the go-ahead design for the new building and new look Phoenix Garden. Work on these developments will commence in the summer of 2015. Also being put to good use is the £500 grant given recently to Phoenix by the MPGA. This has been used to purchase fruit trees for the restoration of a part of the garden.

Phoenix’s community gardener Chris Raeburn first got involved with the garden back in 2002 when he responded to a request on a tiny piece of paper asking for a part time gardener. With a history that combined the study of sculpture at Chelsea College of Art & Design, together with working in mental health – and of course his knowledge and passion for wildlife and plants – it really was a case of right place, right time, and right person.
What Chris, the trustees, and the many community volunteers have achieved over the last 10 years is far beyond the scope of this post. You really need to go and see the garden for yourself to appreciate what has been created here. The challenges Chris and his team have overcome have been immense. 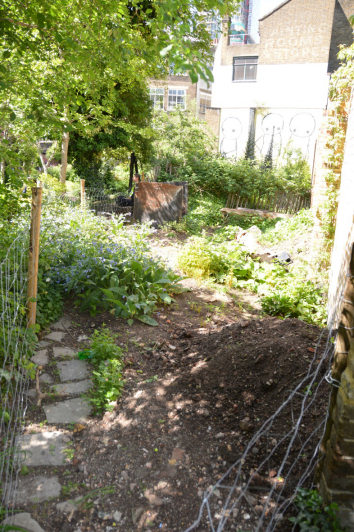 The area of the garden where the MPGA’s funds will be put to good use. Work commences here in a few weeks.

As an extremely dry garden Chris has used the site as a kind of horticultural laboratory, testing the ‘drought tolerant’ labels of many plants: and in the process proving otherwise! As I walked around the garden, I couldn’t help but compare its challenges to Beth Chatto’s dry garden experiment in Essex. Although, with the plants at Phoenix sitting on such shallow, thinly-impoverished soil, their roots wrapped around some 14 tons of rubble, to contrast and compare the two gardens would not be fair and right somehow – the plants’ habitats being so very different.
Chris gardens with a very holistic philosophy, always mindful of the natural connections between the plants, the wildlife, and all those who use the space: workers, tourists and the local community. In Chris, I found a kindred gardener with whom I share many aspects of my own horticultural thinking. For example, he knows that ‘plants want to grow’! This is so true. Like us humans, they too want to live and will invariably stretch and adapt their tolerances to extremes in order to do so.
Chris also has a ‘no weed’ policy. In that, yes, there may indeed be members of the plant community that are more vigorous than others. Yet, by gardening like a ‘grazing cow’ – an idea introduced by the great Henk Gerritsen – simply ripping the tops off invasive weeds will always weaken them into submission and also allow neighbouring plants to do their thing.
As I say, I left the garden horticulturally gob-smacked and somewhat dumb-founded at what I saw there. Unlike many of London’s gardens and squares, this is not what we’ve come to expect in our great capital – at the Phoenix expect something very different. It’s not a neat garden space where sitting behind low Box hedging are borders occupied by rounded evergreen shrubs together with 3ft high pruned roses, all nicely in-filled with hardy Geraniums and Acanthus. 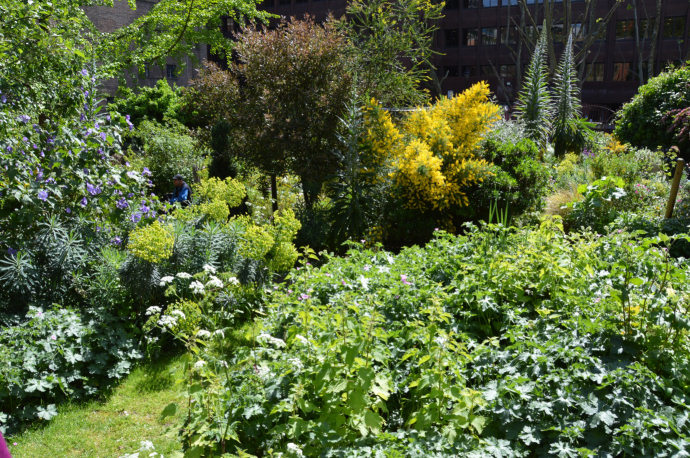 At Phoenix expect a garden overflowing with plant diversity, where potted cultivars sit in harmony with their native and distant relatives. Expect to see a garden that looks incredibly labour intensive, yet is remarkably low-maintenance. Expect to see wildlife, a film shoot, builders’ rubble, a shopping trolley, towering echiums – who knows?
Of course, even with the success of the garden, the new lease agreement and the huge £400k funding, Phoenix will no doubt continue to face new and uncertain challenges, as success and expansion always bring changes to the way a project is managed and perceived. However, it’s also worth remembering that at its core lies a garden, and that no garden is ever finished and that, yes, plants do want to grow! 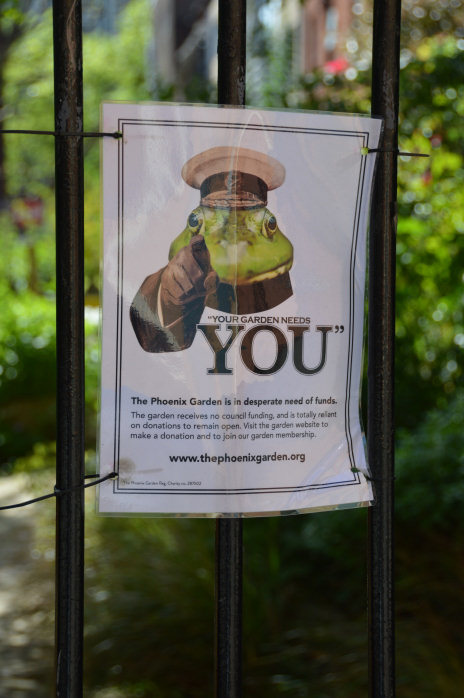 I do recommend you visit the very comprehensive Phoenix Garden website for a great introduction to the place and to see how its working philosophy is put into horticultural practise. I’ve no doubt you will also get a sense of the incredible results that can be achieved from adopting a rather holistic, nurturing and grazing attitude towards all that grows in your garden.

Also, whilst in the area, why not visit St Anne’s Churchyard Garden located in Wardour Street, a mere stone’s throw from the Phoenix. Steeped in London history, the site dates back to the late 17th century, and the gardens were laid out by the MPGA’s very own landscape designer Fanny Wilkinson back in 1891. Of course, being so close to the Phoenix Garden, the church itself suffered from the same bombing raids of autumn 1940, leaving the entire church – apart from its tower – completely destroyed. Soho is famous for many reasons – most of them historically unsavoury. However, times have changed the area somewhat and what Soho now represents, for me at least, is a chance to experience London, eclectic and vibrant, celebrating its diversity and difference.